Driven by a growing economy and strong stock market, home and rent prices have steadily increased for nearly 10 years straight. While this growth has been a boon for owners, renters are increasingly finding it harder to find stable, long-term housing. In fact, nearly 40 million Americans cannot afford their current homes—spending as much as half of their incomes just to meet their rentfootnote1.

To help solve an issue as large as the affordable housing crisis, city, county and state governments, nonprofits and private companies will need creative new ideas. That’s the approach Bank of America and its partners are taking to address housing shortages in San Francisco and Los Angeles.

Neither governments nor nonprofits alone seem able to marshal the resources needed. Where, then, can the money be found? Increasingly, the answer seems to be private investors—who are making great strides in learning how to partner with governments and nonprofits to address the housing crisis. In 2019, Bank of America was recognized on Fortune Magazine’s annual “Change the World” list for its work to address this gap in affordable housing through innovative financing solutions.

The federal government spends nearly $200 billion per year on housing assistance programs, but the vast majority of it is allocated, via tax deductions, to households earning more than $100,000 per year. Americans earning less than $30,000 per year receive only a small slice of that assistancefootnote2.

Meanwhile, it’s estimated that as many as 7.2 million new units are neededfootnote3 to meet current demand for affordable housing. To address this shortfall, local governments often partner with nonprofits to finance the building of more affordable homes. These partnerships provide critical support, but the problem is simply too large to be resolved on a state-by-state, or even county-by-county, basis.

That’s where private capital—through grants or direct investments, and working in partnership with local governments and nonprofits—can help come up with solutions. In 2020, for example, Bank of America deployed a record $5.9 billion through its Community Development Banking unit to help neighborhoods across the country in greatest need of affordable housing.

This investment helped produce more than 13,800 housing units, of which more than 13,000 were affordable, including:

Five years ago, Jordan Downs, a 1950s-era public housing development in the Watts neighborhood of Los Angeles, was in dire need of redevelopment—which it’s now getting, through the cooperation of Bank of America, the City of Los Angeles, the Los Angeles Housing Authority, the nonprofit BRIDGE Housing and for-profit developer Michaels. The completed project will add 1,400 affordable housing units, new retail spaces, a community center, and public green spaces and parks. For the initial phase of the project, Bank of America Merrill Lynch provided $56.7 million in construction loans and $50.4 million in low-income housing tax credit (LIHTC) equity to break ground on 250 new units.

Now, other large companies are beginning to see the importance of helping develop affordable housing in the communities they serve. In January 2019, Washington state-based Microsoft announced a partnership with the cities of Seattle and Redmond to commit $500 million to increase the affordable housing stock. Their decision is part of a growing trend that looks beyond just philanthropy to find solutions to this problem.

To solve an issue as large as the affordable housing crisis, city, county and state governments, nonprofits and private companies will need to adopt and improve on the creative approaches like those that made the Jordan Downs and SF RAD projects a success. The combination of policy expertise from local governments, the deep understanding of the issues NGOs have, and the ability for large financial institutions to find ways to deliver the capital needed are all key elements to finding a lasting solution. As this cooperative model matures and brings more creative solutions to bear, it offers great promise for resolving affordable housing issues not just locally, but even globally.

Read more about our commitment to affordable housing and community development.

Brian Moynihan, Chairman & CEO: When you think about big threats to the world, and you think about what’s our role, it’s going to take lots of money and lots of thinking about how to apply that money, to solve these big problems. One of them being the problem of affordable housing, and how we invest in our low and moderate-income housing, both at the individual owner level, but also the multi-family level.

Doug Shoemaker, President of Mercy Housing California: On this particular project which is, um, a former public housing development, Bank of America partnered with the city of San Francisco and decided to finance the entire transaction.

James DeMare, Co-Head of Global FICC Trading and Head of CREB: To take 35-40,000 units that were in public housing that were considerably under-invested in and required a fair amount of rehabilitation required some creative thinking.

Doug Shoemaker: It made it possible to basically transfer a huge number of buildings that were literally falling down over to non-profit and for-profit partners like Mercy Housing.

Viola Ryan, Resident of Mercy Housing Former Marine with 20 years of service: Now, oh, my God, what a miracle! We got everything. We got management. We got activities. It’s nice now! Comfortable. I feel safe now.

Doug Shoemaker: The bank’s longevity in this field, and their commitment to it means that as people look out and they see Bank of America, they think that it clearly is going to be a safe investment, it’s a safe use of money.

Olson Lee: It was not just the financial transaction for the bank. They clearly shared our vision for making this huge change. 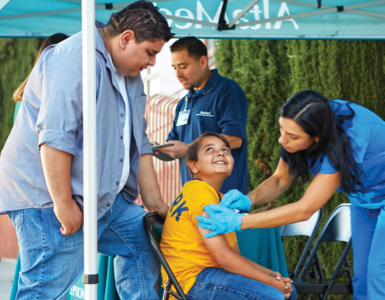 How AltaMed is serving Hispanic-Latino communities through the coronavirus 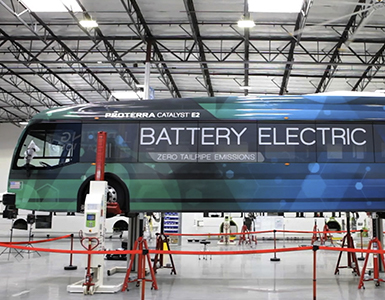 How Proterra is helping build the future of clean, sustainable transportation