As a longtime underwriter of Ken Burns’s films, Bank of America is proud to support his latest documentary, COUNTRY MUSIC. It all began with a March 2019 bus tour that took Ken, his team and a few special guests on a road trip throughout the state of Tennessee—the birthplace of country music.

MUSIC THROUGHOUT: Wagon Wheel, as performed by Ken Burns, Ketch Secor, and others on the PBS Country Music Tour Bus

SUPER: THE POWER TO TELL AMERICA'S STORY THROUGH MUSIC

AUDIO - KEN BURNS: We've been on a bus tour for a few days traveling all across Tennessee. We can easily say that Tennessee has contributed as much to this music as any state ever.

VIDEO: Tour bus drives down the highway in Tennessee.

AUDIO - KEN BURNS: We started in Nashville, went to Bristol and then to Sevierville, home of Dolly Parton and went to Knoxville and Maryville, and then we got up super early and we're back in Nashville on our way to Memphis only to turn around tomorrow to come back for a big concert at the Ryman Auditorium with a lot of the folks that are in our country music series.

VIDEO: Graphic appears showing an outline of the state of Tennessee with stars marking each of the tour stops.

AUDIO - KEN BURNS: The last 13 years Bank of America has been our sole corporate underwriter. They have an interest in being a good corporate citizen. They have an interest in sharing the stories, the complicated stories of this country. Country music is another way to sort of ask, who are we? Who are those strange and complicated people who call themselves Americans.

VIDEO: Ken and Ketch join Meredith Verdone for a photo.

AUDIO - DAYTON DUNCAN: It's the words, it's the stories in country music that I like. It's the expressions of things that you relate to directly and you don't have to overthink it. On-screen text: Julie Dunfey, Producer, Country Music

AUDIO - JULIE DUNFEY: One of the first things that surprised me was the connection of fans and country music artists. One of our interviewees says, once they love you they never let you go. You could have had only one hit 20 years ago but you still belong to them. On-screen text: Ketch Secor, Old Crow Medicine Show

AUDIO - KETCH SECOR: I always wanted to meet Ken Burns because I was such a big fan even when I was 11 years old. But then it got even richer when we all got on a tour bus together. Ken Burns is an animal y'all! He doesn't sleep, there's no food or water. By the end of the tour, Ken Burns was playing harmonica in the band at four in the morning.

VIDEO: Ken takes notes, reads the newspaper, and plays the harmonica while on the tour bus.

AUDIO - KEN BURNS: We were looking for the resonance of emotion and in most of the films that we've made, we've been able to touch it and no more so than in country music which is a big wet kiss of emotion. We've tried to distill that for the series and it's been one of the most satisfying things I've ever worked on. As a filmmaker, we have the power to reach millions of people with the story of America. That is a great honor and a great privilege and a great responsibility.

VIDEO: Ken takes the microphone and steps on stage at the Ryman Auditorium.

SUPER: WHAT WOULD YOU LIKE THE POWER TO DO?®

SUPER: We’re proud to support the work of Ken Burns.

Along for the journey were Ken’s longtime co-producers, Dayton Duncan and Julie Dunfey, as well as Ketch Secor, the lead singer of the band, Old Crow Medicine Show. The four-day tour saw Ken traverse Tennessee, going from Nashville to Bristol, down to Knoxville, and then across the state to Memphis before finally stopping back in Nashville for an epic concert event at the famed Ryman Auditorium (2 hour special airing on PBS September 8th at 8pm ET).

Along the way, Ketch led the bus in a rendition of his famous song Wagon Wheel, with Ken even joining in on harmonica. Other highlights included a stop at the Birthplace of Country Music Museum, a meet and greet in Sevierville—the home of Dolly Parton—and seeing where famous artists like Johnny Cash and Elvis Presley recorded at Sun Studios in Memphis.

On the last day of the tour, Ken and Ketch joined 5 additional country artists featured in the film series: Rhiannon Giddens, Kathy Mattea, Holly Williams, Marty Stuart, and Ricky Skaggs at the Country Music Hall of Fame in Nashville where Burns announced that he would be donating all 174 hours of interviews from the film to the museum’s archives.

Ken Burns, Julie Dunfey and Dayton Duncan outside the legendary Sun Studio in Memphis, where artists like Johnny Cash and Elvis Presley once recorded.

Ken Burns diving deeper into his latest film at the Country Music Hall of Fame in Nashville.

Our commitment to support & strengthen Nashville 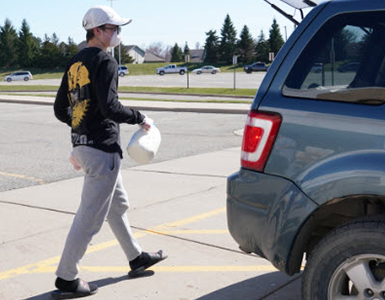