GRAPHIC: THE POWER TO
start again

AUDIO: Joe Dawson: Because of EDWINS, I feel like I have hope all over again. They specialize in second chances. That’s what EDWINS is all about. And I needed that second chance.

AUDIO: Brandon Chrostowski: EDWINS uses culinary training to help men and women returning home from prison find long-term success. This program is engineered to challenge. It’s like this break and rebuild philosophy. We set out a high challenge: you’re serving four weeks and then you’re bartending for four weeks. You know, and then you’re going through the kitchen. Slowly but surely what we’re building back is that muscle of esteem.

AUDIO: Brandon Chrostowski: I was so upset that a student here had to live in a shelter, in the back seat of a car, or in some toxic environment, because they had no other choice. So I said we’re gonna build housing. That’s it. And raise the money to get it open. The Bank of America Neighborhood Builders Award changed the dynamic in which our student body can learn. They were the ones to come in and helped us and not only finished the buildout of our campus, but they helped us with the operational expenses.

AUDIO: Nicole Palmer: I was staying at the homeless shelter and it was just a lot of challenges. When I got the opportunity to move to one of the dorms I’m like, “Okay, great.” I can focus now and it’s more, like, encouraging.

VIDEO: Nicole Palmer walking out of dorm and down street.

AUDIO: Brandon Chrostowski: With Neighborhood Builders, we have the power to offer hope and a way to achieve it. 262 graduates that have gone through this program. We have 1.1 recidivism. By the time you come out of here, you’re like, “I can do anything.”

AUDIO: Nicole Palmer: It makes me feel like that I’m on the right track.

AUDIO: Joe Dawson: You know you talk to other graduates that come back and they always say, you know, that EDWINS will open doors for you.

AUDIO: Alexander Roman: I was once a student and now I’m the sous-chef here at EDWINS. You know, use me as your stepping stone. Let me give you that little push.

VIDEO: Food being prepared. Food on the table.

AUDIO: Joe Dawson: I learned that I am a soldier. I am stronger than what I thought.

VIDEO: Food being prepared. Close up of Joe Dawson’s face.

AUDIO: Brandon Chrostowski: Here, we’re showing that if you give someone a fair and equal opportunity, you offer support, someone can find a more powerful yes.

GRAPHIC: Since 2004, Bank of America’s Neighborhood Builders program has:
Partnered with 1,000+ nonprofits in 49 communities
Advanced the leadership of 2,000+ nonprofit executives
Invested more than $220 million to build more sustainable communities
…and counting

EDWINS Leadership & Restaurant Institute in Cleveland, Ohio demonstrates how developing skill sets and providing a supportive environment can open doors to economic opportunity and set individuals on a new path to success. EDWINS empowers formerly incarcerated adults as they transition into the next phase of their lives through culinary education and additional support services, such as employment opportunities and housing. Founded in 2007, the organization runs a French restaurant staffed by graduates of its restaurant and hospitality training program, based in Cleveland's Shaker Square neighborhood, and a program in partnership with the Grafton Correctional Institution. Students of the training program also have access to legal services, basic medical care, clothing, job coaching and literacy programs.

In 2016, EDWINS was named a Bank of America Neighborhood Builder®. As a Neighborhood Builder award recipient, EDWINS received $200,000 in flexible grant funding and leadership development and training for an executive director and an emerging leader at the organization. The unrestricted grant funding gave EDWINS the power to complete the Second Chance Life Skills Center, a 20,000-square foot campus for work, recreation and student housing. This facility quickly became a refuge for students who were homeless or struggling in unstable and unsafe living environments.

"The Bank of America Neighborhood Builders award changed the dynamic in which our student body can learn," said Brandon Chrostowski, EDWINS Founder, President and CEO. By being able to offer safe housing and a day-to-day setting for students, EDWINS is putting into action its founding principle that "every human being regardless of their past has the right to a fair and equal future."

Today, EDWINS continues to be a force for positive change and opportunity throughout Cleveland. With 262 graduates to date, EDWINS has a 97% post-graduation employment rate with only 1.1% recidivism, as compared to the national average of 44% recidivism. EDWINS has also expanded its outreach to prisons via Culinary Clubs and is in the process of opening the EDWINS Butcher Shop and Training Center to provide more opportunities for individuals in the area's prison system to gain the skills they need to be successful.

Since 2004, Bank of America's Neighborhood Builders program has helped advance sustainable communities by investing more than $220 million in 49 communities - partnering with more than 1,000 nonprofits and more than 2,000 nonprofit leaders and counting. 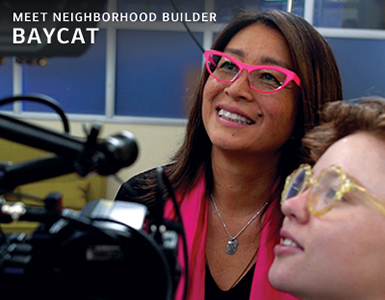 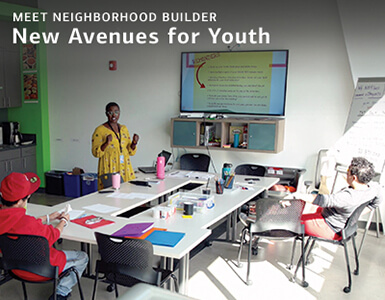 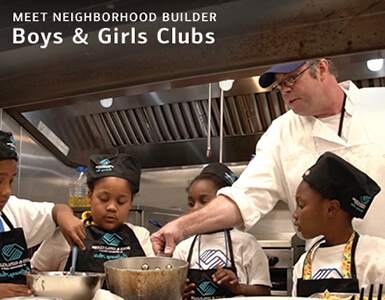